The following post was written by Josh and Lindsay Bruce. Josh has recently completed his PHD and they will shortly be moving back to America. We wish them well and look forward to hearing about their next chapter. 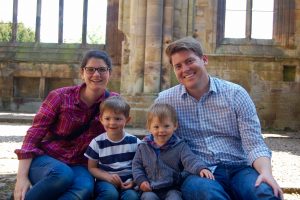 Legend has it that when the humble Scot, James Boswell, was introduced to the intimidating English man of letters, Samuel Johnson, he said: ‘I do indeed come from Scotland, but I can’t help it.’ Having moved from the states and lived with my family in Edinburgh for three years now, I think that Boswell was just being Scottish, which is to say: very modest. Scottish people routinely apologize (or is it apologise?) to me that their beautiful country might not be up to my standards. I suspect that it’s not because they actually feel that way, but because their innate kindness and sense of hospitality requires that they apologise politely to newcomers like me anyway. Perhaps it’s their way of making non-natives feel welcome, something that Scottish people are particularly good at.

Whatever it is, it’s the same impulse that also dictates how they graciously respond to questions from Americans like me who are not used to wandering around a medieval city like Edinburgh.  Of course, I have never personally asked any of the questions I’m about to list here. But these are some examples of questions that I have — ahem — heard other Americans in Edinburgh ask.

‘Is that a real castle overlooking the city?’

‘Is a proper British pub the same thing as an American sports bar?’

‘Who was Mary Queen of again?

The answers to those questions are, in order:

But most Scottish people will give you much nicer answers than those. They might even take you to one of the places you’re asking about, just to make sure you get there alright. The worried expression on their faces reflects genuine concern that someone who doesn’t know the difference between a pub and a sports bar might end up getting lost and being eaten by Edinburgh’s wild alligators. [Ed. note: there are actually no wild alligators in Edinburgh. Also, that’s another question not to ask. Not that I have.]

This Scottish hospitality and welcome extended to the stranger harkens back to the words of someone else who said: ‘For I was hungry and you gave me something to eat, I was thirsty and you gave me something to drink, I was a stranger and you invited me in.’  (Matthew 25:35)  For all the talk in the states about Scotland as a ‘secularized’ place, one where religion has ceased to play a major role in society, I’d say that a place like Edinburgh is doing pretty well by the standard in Matthew’s gospel. But most Scots wouldn’t say that. They’re just too modest.